DO BUBBLERS MAKE YOU HIGHER? 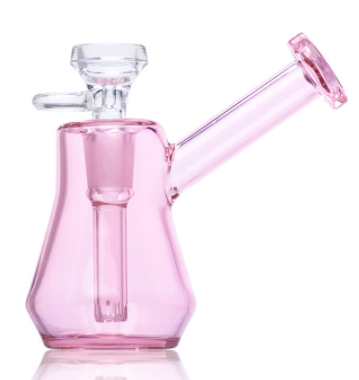 A bubbler is a type of water pipe, composed of three essential parts-the bowls, chamber, and mouthpiece. Technically it works like a bong but it is made in a much smaller size that brings users convenience and portability. A bubbler features a chamber with a percolator or diffuser. Bubblers have their own advantages and are slightly different from bongs.

Certainly, if you have been smoking your dry herbs (legally) for a while, then you will agree that some pipes are better than others. Most smokers will start with plain spoons such as a plain nice glass spoon. It’s also no secret that Bongs are another great way of enjoying your dry herbs as they diffuse the smoke for an easy hit while providing a great flavor. However, any cannabis enthusiast will always want to elevate their smoking experience and that’s where Bubblers come in handy.

A bubbler has proven to be the most stable and convenient smoking equipment for many recreational users and patients alike. It combines the water pipe function, filtration, and the ease of use of a regular glass pipe to provide the smooth smoking experience of a standard hand pipe. Bubbler pipe gives the best of both worlds between bongs and water pipes. They are relatively smaller than bongs, hence portable. Also, they come in various styles, such as the hummer bubbler and mini bubbler, not to mention an array of materials such as borosilicate and silicone. Their flexibility also makes bubblers makes an essential collection for every smoker.

Look, folks! We may spend the whole time talking about bubblers but that would probably require a separate piece. In this one, let’s find out whether bubblers make you higher or not. Read on!

Frankly, the experience of taking a pull from a clean, fully loaded bubbler is surprisingly pleasurable. There is always a low or no drag whatsoever. Smoking using a bubbler provides an immediate smooth hit, it is flavorful, and, most importantly, there is no blast of heat. Moreover, when you smoke from a bubbler, you not only get the dank flavor but also you get to experience the fantastic effects of packing a bowl and toking it up. So, are you looking forward to a greater smoking experience? Then you can rest assured that the bubblers never disappoint.

2. Learn To Use Your Bubbler the Right Way

Truth be told, as a beginner, using your bubbler the right way may seem like a hassle. The good news though is, it is simple. There isn’t any rocket science here. You start by filling the water chamber with some cold water (for smoother hits), then grind your dry herbs, (certainly some weed), then hit and pack it into the bowl piece. Note, for those bubblers with a carb, cover it with your thumb and place your mouth on the mouthpiece. You’re almost done here. Just light the bowl and start drawing the smoke gently as well as consistently into the chamber then inhale it. Now, you can remove your finger or thumb from the carb and proceed to inhale the rest of the smoke from the chamber. You will get to enjoy much smoother hits.

Complexity is one major difference between bubblers and other pipes such as bongs. Bubblers do not contain unnecessarily complicated filtration systems. The filtration is kept basic but ultimately efficient with a water chamber. The water plays a crucial role in removing the harsh taste as well as the rough feeling of the smoke while inhaling. In fact, a bubbler with a percolator goes a long way in providing a top-rated smooth filtration, hence more hit. In case you’re wondering, what percolators are, they are glass shapes within the piece to tone down the harshness of the smoke. In that regard, a bubbler is a better option if you are looking for a well-filtered smoke.

4. Don’t Pull As Hard On a Bubbler As You Would On a Bong

With a bubbler, you will never inhale as hard as you would with a big Bong when you pull hard, and that’s the truth. Instead, you will just find some water at the bottom of the bubbler in your mouth. This is another reason why bubblers don’t make you higher. Additionally, if you cough as a result of pulling hard, make sure your face is away from the bubbler, or else you will blow your smoking products, messing the room.

To sum it up, bubblers offer a more fun method of smoking while adding variety to the entire experience. They are portable, flexible, and convenient to use. Moreover, bubblers cool down the smoke you inhale, thus reducing the impact it has on your body. Perhaps the added convenience can make you higher, but what the bubblers do most is provide smoother and cleaner smoke.

5. Understand the Anatomy of a Bubbler

Understanding the anatomy of a bubbler is a great way to determine its effectiveness. Remember, you want to smoke weed safely and have fun while at it. Just like a regular dry pipe, bubblers feature a mouthpiece, a bowl, and sometimes a carb hole. In fact, you may not be able to tell the difference easily. However, bubblers have stems built around the bowl for holding some small amounts of water. This water filters and cools your smoke before inhaling it. Just like that, you get to experience hits that are not only smooth but also clean.

The flexibility of bubblers makes them an undeniably essential part of many smokers.

Previous: None
Next: WHAT IS THE PERFECT GLASS RIG SIZE? HOW BIG IS TOO BIG? SMOKER PRO TIPS
Join us, Let’ s develop high-tech products together and create a splendid future hand in hand!